What’s Bipartisan Cafe All About?

In a word, the Bipartisan Café was built and has evolved around our belief in Community. Within the café, our strength has always been working with people to try to create a place where they can get along on a real level, a place where everyone’s best and worst qualities are dealt with in a realistic, easy-going way.

Sure, there’s coffee and sandwiches and bagels and pies, but they’re just the props for the café owners to be able to do their real job – which is making sure that people are working together and getting along, even when they don’t necessarily get along.

Our sandwiches are simple and made to order, with the healthiest ingredients possible. We want you to taste roast beef that looks like it’s made with your mother’s leftover roast from Sunday dinner. Our scones, muffins, pecan rolls and other baked goods are made with real butter, by-hand and in-house, daily. Our soups are made from scratch, also in house. When we can, we buy local and organic, always making sure to keep things affordable, as well.

From the earliest days before Montavilla was the community that it has become, Bipartisan Café has worked hard to build a neighborhood coffee shop where community members can congregate and share ideas. We believe very strongly in the residents and customers, the small businesses and schools, the events and associations that all conspire to build a community out of this neighborhood.

The History of Bipartisan Cafe

Many years ago back in 2004, the owners (Peter and Hobie) had no idea where the Montavilla neighborhood even was. But Pete had a 20 year-old idea for the Bipartisan Café, so he took the cash from his stock options and found a space on SE 79th and Stark for rent. He was immediately in love with the neighborhood, even though at the time there was only Flying Pie Pizzeria, Ya Hala, Thatchers and a few other bars.

The couple had never opened a place together, but they had both worked in restaurants all of their lives. Hobie can remember standing on a bucket and cleaning shrimp at one of her parents’ many restaurants when she was just 11 years old, or working as a teenager making pies at another of her family’s ventures. Pete always wanted to be a chef, but started out as a busboy in a fine dining restaurant in downtown PDX. After nine years there, he worked at many places: dive bars, college bars, all before getting a job bartending at a Jazz club, where Peter and Hobie finally met. The rest, as they say, is Bipartisan history.

Bipartisan Café started out with just 3 employees, and has grown to a staff of more than 20. Over the years, the two owners fell in love with the café, though it was a long, slow process. In the beginning, it was all just a risk. Finding community in the fledgling almost-neighborhood was a difficult task. But now, as they look out onto the Montavilla neighborhood, they see friends and familiar faces everywhere. And when you visit the Bipartisan Café, what you will see is a 55 year-old couple (no longer married but still friends and business partners), which has found a community to grow old-er in. 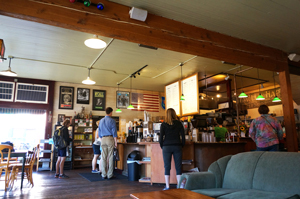 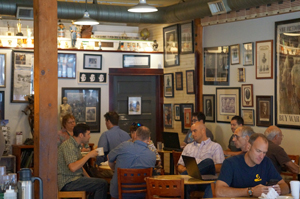 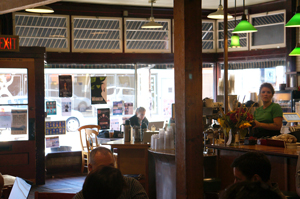 Hosting Your Event at Bipartisan Cafe

If you’re a musician, politician, author or other interesting individual looking to hold an event at Bipartisan Cafe, drop us a line at info@bipartisancafe.com, or fill out the form on our Contact page. Include as many details as possible about your event, as well as a few preferred dates and times, and how many people you anticipate attending.

We conduct all business regarding event hosting through our website, so expect either Hobie or Peter to get in touch after you make contact. Please note, we can’t guarantee that there will be reserved seating, and if you want to host a speaker or do a reading, be mindful that we cannot close the café down or otherwise disrupt business in any way for an event. If you are hosting a 3-4 person meeting, that’s fine and permission is not required. Be mindful that you have to include the community if you’re going to host a public event at Bipartisan Café.

Bipartisan Café welcomes the prospect of engaging political debate and seeks to promote understanding and a healthy exchange of ideas among its patrons. Even if you’re just an intrigued coffee drinker looking to stimulate thought-provoking discussions, we’re interested in your ideas for discussions and events to further the political dialogue, particularly in a time as politically groundbreaking as the one we live in. 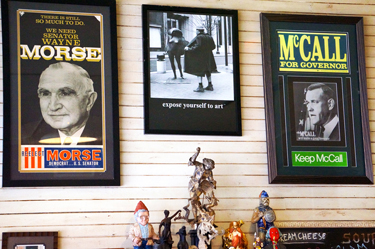 The Significance of the Art Hanging Up at Bipartisan Cafe

What we hang on the walls of the cafe represents American presidents and politicians, political memorabilia, and anything we find that clearly represents major political or historical events that have shaped us as a nation. We include both flattering and unflattering reminders of who we are as a nation. We try to represent all citizens and groups of people to the best of our ability.

We have every president represented, and we have every flag flown in the United States. We represent Native Americans whom we displaced. We include the Confederate states, because they represent a significant event in our history, and there are still many who share the values of the confederates living today.

When we think of an event that we believe should be represented, we try to find something that can represent the event succinctly. We try to find something with age, or patina, or some heightened or unique quality to its production. Our collection is by no means complete, but unfortunately, the walls are finite. Everything has been arranged (more or less) chronologically, starting with a representation of the last of the great Native American Chiefs, on the east wall by the window. The images then proceed around the room until you get to the hall in the very back. There is a lot of history on these walls.