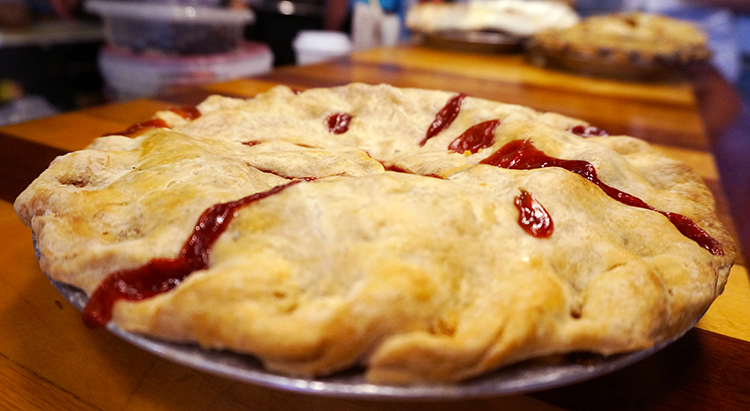 When you’re avoiding gluten, it seems to pop up everywhere to ruin your fun. And what could be more fun than a slice of pie? Unfortunately, pie is often off limits for the gluten intolerant. You see, most piecrusts contain wheat, ergo, they are chock-full o’ gluten.

If you’ve been searching Portland for the perfect gluten-free pie, then you’re in luck. You’ll be happy to know that Bipartisan Café in the Montavilla neighborhood offers a wide variety of delicious, house-made, gluten-free pies.

Feeling the crispness of fall in the air? Try our perfectly spiced pumpkin or all-American apple marionberry pies. Need the perfect pie for a potluck? Pick up a peaches & cream or triple-berry gluten-free pie. From peach blueberry to pear and candied ginger, Bipartisan Cafe has the perfect pie for every PDX occasion.

And yes, all of the pies we’ve just mentioned are available gluten free. But those aren’t the only GF pies we offer… far from it! Our handmade, gluten-free pies are sweetened with agave nectar, not sugar, and they’re 100% delicious.

Best of all, they’re available made to order. Just give us at least two days’ notice, and we’ll do our best to make the special pie you’ve been craving. Call the Bipartisan Café Pie Hotline today, at 503-253-1051.

Our biggest tip is “try our pies!” But we understand that sometimes you just want to make it yourself. This is Portland, after all – land of artisanal everything. So with that in mind, here are some helpful tips for making your own gluten-free piecrust.

First, don’t just substitute gluten-free flour in a regular piecrust recipe, as the water/flour ratio is likely to be different. You may also notice that some gluten-free pie crust recipes call for bonding agents like xanthan gum. Find a gluten-free recipe you like, and follow it to the letter for best results.

Second, use cold, high-quality butter. At Bipartisan Cafe, we use non-hydrogenated Earth Balance, because it is also vegan. So the point is, whatever fat you use, make sure to keep it chilled. If you’re an old hand at making pies, then you already know that this is an important rule for any pie recipe, but it’s doubly important for gluten-free pies. We don’t use butter.

Third, wrap your pie dough in wax paper and chill it for at least an hour before breaking out the rolling pin. This will ensure that the butter in your recipe stays cool while you’re working with it, and you’ll definitely notice better results.

Fourth, give your gluten-free pie a test run before presenting it at a big event, just to make sure it tastes as delicious as it should. If you’re gluten intolerant or suffer from something as potentially serious as Celiac disease, then you likely know all about it. But just in case you’re wondering why you’ve been seeing “gluten-free” labels popping up everywhere these days, here’s the skinny.

Gluten is a material that’s found in cereal grains like wheat, barley, rye, and oats. Specifically, gluten is the part of the grain that gives bread its chewy and elastic texture in your mouth.

But for those who are gluten intolerant, gluten is a very serious problem. Contrary to popular belief, gluten intolerance isn’t a food allergy. It’s a condition in which one’s body mistakes gluten proteins for foreign invaders. The body reacts by attacking the gluten, which causes gut irritation and poor nutrient absorption.

Gluten intolerance can cause chronic fatigue, neurological disorders, nutrient deficiencies, depression, and a host of other unpleasant conditions. So it’s no wonder that so many folks actively avoid gluten, and grocery stores and restaurants have picked up on the development, creating specific labels and pointing out whenever possible that there’s gluten present in food items.

Living in PDX? Then Say Hooray for Gluten-Free Pies!

We hope you’ll stop by Bipartisan Café one day soon and try our gluten-free pies, even if you’re not gluten-intolerant. You’ll never miss the gluten – we’re absolutely sure of it!

Previous Post: Bipartisan Cafe in Portland Celebrates 10 Years
Next Post: Guide to Businesses in the Montavilla Neighborhood of PDX